Flex Bygg AS in Bergen is a master builder with years of experience, skilled craftsmen and outstanding expertise. Flex Bygg is a preferred supplier to Thon Hotels and oversees most rebuilding projects for Olav Thon Gruppen. When general manager Michael Hansen was introduced to the Liftroller he knew immediately that this was a tool that would save him a lot of money. He did not hesitate but promptly ordered the Liftroller system for all of his ongoing projects.

Thon Hotel Bristol in Bergen was the first project to take delivery of the Liftroller. Only an hour after the Liftroller system had been delivered and fitted, the crane lorry arrived to unload plasterboards and timber studs.

Crane operator Svein Kallestad from Kallestad Transport had encountered the Liftroller in the past, including on a school project in Austevoll. Having emptied his lorry in record time, Svein had the following to say about the Liftroller: “It’s an ace patent! Much faster than other solutions we tend to see. Lightning fast!”

Carpentry foreman Lukas Dyrek at Flex Bygg AS had never heard of the Liftroller until he had one delivered. After the first time of using it he said he was surprised to see how easy it was to shift materials using the Liftroller. Alternative methods would’ve taken much longer, he concluded.

It’s an ace patent! Much faster than other solutions we tend to see. Lightning fast! Long packs of materials are easily rolled onto the Liftroller Wagon to be transported further into the building. 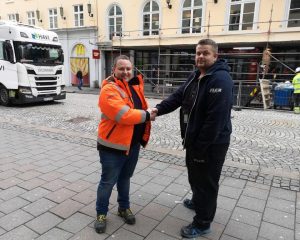 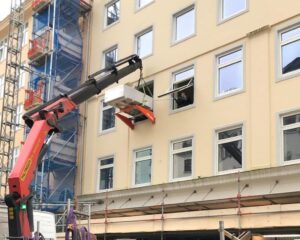 Long packs of materials are easily rolled onto the Liftroller Wagon to be transported further into the building.

Building materials being craned into the building using the Liftroller Wall. 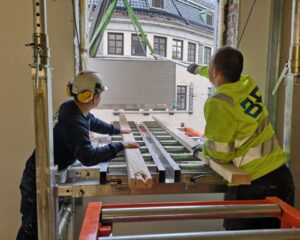 Materials are craned directly onto each floor easily and efficiently.

Here is a video of several projects using the Liftroller system for logistics, among them Thon Hotel Bristol